Statistical Innovations was founded by Dr. Jay Magidson in 1981 to improve the way that data analysis was being conducted in marketing research, biomedical research, and other arenas.

In the mid 1970’s, as a graduate student in the Managerial Economics and Decision Sciences department of Northwestern University’s Kellogg School of Management, Jay was exposed to publications by Prof. Leo Goodman, and by Prof. Karl Jöreskog that proposed intriguing new methodologies. Goodman is now recognized as Pioneer in the field of categorical data analysis and developer of modern latent class modeling, and Joreskog as Pioneer in the field of Structural Equation Modeling and “father of the LISREL computer program”. Jay recognized the potential of these new methods to revolutionize the field of statistical modeling.

In 1974 Jay attended Goodman’s course at nearby University of Chicago and also attended the first LISREL workshop by Jöreskog the following year, which also was held in Chicago.

After completing his dissertation on an extension of Goodman’s methods, he became senior statistician at Abt Associates in Cambridge MA., and maintained his relationship with both Goodman and Jöreskog by conducting annual workshops with Goodman for over 20 years (1977-1999) and with Karl Jöreskog and Dag Sorbom (1979-1982). Dr. Magidson also edited their books, both of which became best-selling classics.

“Jay Magidson was the first person who thought it would be very useful and very important to publish a book on the Analysis of Qualitative/Categorical Data. He then arranged to have such a book published.

After this particular book was published, many courses were taught on this subject at colleges and universities in the U.S. The Analysis of Qualitative/Categorical Data is now taught at very many colleges and universities in the U.S. It can be taught both at the graduate level and at the undergraduate level. Other books on the Analysis of Qualitative/Categorical Data have now also been published.” Leo Goodman

“In the early days of LISREL Jay Magidson made several contributions to help spread the word. He convinced me about the importance of publishing a book which we called “Advances in Factor  Analysis and Structural Equation Models” which Jay prepared for publication. He wrote the preface and the introduction to the three sections, and did whatever editorial work needed to be done. Jay also organized workshops with me and Dag Sorbom that we conducted annually 1979-1982 that proved to be very popular and contributed to making LISREL accessible to researchers.”  Karl Jöreskog 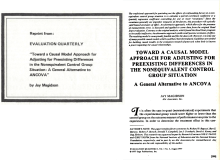 Dr. Magidson has shown good insight in customizing statistical models that improve over conventional approaches to real world problems. His publication in Evaluation Quarterly (1977) was the first to show how the LISREL methodology could be applied to evaluate the effects of an intervention, now a common practice. Originally, it was believed that the Headstart Summer program yielded negative effects due to the overly simplistic model assumptions used at that time. Jay’s LISREL model supported positive effects for Headstart.

n has consulted with many organizations and also continues to teach via his online courses, conference presentations, and publications. He is frequently the only non-academic author in graduate level texts. For example, he contributed 2 chapters on analyzing categorical data in Richard Bagozzi’s popular text “Advanced Methods of Marketing Research, including the use of CHAID.

“… yours is the very best firm offering the most advanced statistical analyses in program evaluation and quasi-experimental design. Particularly this is so for analyses that avoid the pseudo-effects coming from the neglect of the errors in the variables (or regression artifacts) problems.” Prof. DonaldT. Campbell, Philosopher of Science, Pioneer of Quasi-experimental Designs

His SPSS CHAID program proved to be very popular and helped spawn a new age in segmentation and more general data-mining applications.

In 1999 Jay began a long-standing partnership with Jeroen K. Vermunt in developing the highly popular Latent GOLD® program which uses latent class models of various kinds to help find the gold hidden in one’s data. Similar to Magidson, Vermunt’s contributions draw heavily on the foundation developed by Leo A. Goodman, and in 2005 he was the first recipient of the prestigious Leo Goodman award for his outstanding contributions to social science methodology. Together, Magidson and Vermunt coauthored many important articles on latent class modeling and continue to develop the field with their publications and extensions of Latent GOLD®.

From these beginnings Dr. Magidson has continued to provide organizations with innovative “outside the bracket” thinking, customizing appropriate statistical models which improve over traditional methods which often rely on overly simplistic assumptions  and yield misleading results. His recent work in the biomedical area (with Genentech, Dana Farber, and others) shows how latent class modeling can be highly effective in diagnosing cancer. He is currently working with Consulting Psychologists Press to use latent class modeling in the development of the new version of the Myers-Briggs Personality Type Indicator (MBTI).

In 2013 Dr. Magidson contributed to what is now known as the field of Big Data with his innovative development of regression modeling with large numbers of correlated predictors and developed the associated CORExpress® package.

To learn about our consulting services, see our Consulting page.

This website uses cookies to improve your experience while you navigate through the website. Out of these cookies, the cookies that are categorized as necessary are stored on your browser as they are essential for the working of basic functionalities of the website. We also use third-party cookies that help us analyze and understand how you use this website. These cookies will be stored in your browser only with your consent. You also have the option to opt-out of these cookies. But opting out of some of these cookies may have an effect on your browsing experience.
Necessary Always Enabled
Necessary cookies are absolutely essential for the website to function properly. This category only includes cookies that ensures basic functionalities and security features of the website. These cookies do not store any personal information.
Non-necessary
Any cookies that may not be particularly necessary for the website to function and is used specifically to collect user personal data via analytics, ads, other embedded contents are termed as non-necessary cookies. It is mandatory to procure user consent prior to running these cookies on your website.
SAVE & ACCEPT